Bipolar disorder can be one of the most difficult mental illnesses to diagnose and often mis-diagnosed; when the illness follows the classic pattern of cyclical elevated and depressed moods, diagnosis is relatively easy, but sometimes manic symptoms can go undetected and depression overshadows the other aspects of the illness. 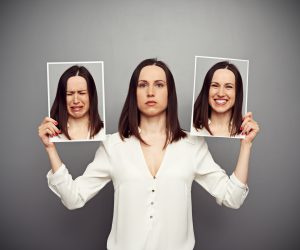 About half the people eventually diagnosed with bipolar disorder have previously consulted up to three professionals. In fact, as many as 20% of people who see their doctor to discuss depression actually have bipolar disorder. In its milder form, the manic episodes of bipolar disorder can pass by unnoticed and depression symptoms outnumber hypomanic symptoms by about 35 to one. Though more severe mania is generally easier to identify, even in the more severe bipolar I disorder, time spent with depressive symptoms can still outweigh manic episodes by three to one.

Substances such as alcohol and cocaine can also interfere with a proper diagnosis of bipolar disorder as they can induce mood swings – and some studies show that as many as 60% or people with bipolar disorder also abuse drugs and or alcohol. Sadly, substance abuse may make bipolar episodes (of either mania or depression) more frequent and more severe, while decreasing the effectiveness of medicines used to treat the disorder.

While children can be diagnosed with bipolar disorder in conjunction with order conditions such as ADHD or behavioural issues, most symptoms begin to present during the late teenage years. Usually, children and younger teens will be diagnosed with disruptive mood dysregulation disorder as symptoms are not always straightforward in the early years.

Bipolar disorder is treated with three main classes of medications: antipsychotics, mood stabilizers, and less frequently, antidepressants; the typical treatment combines at least one drug with psychotherapy. The most widely used medications are lithium carbonate and valproic acid; lithium is used to reduce manic episodes, and is often combined with other medications, including antidepressants, to combat depressive symptoms; valproic acid is a mood stabilizer which can be combined with drugs such as carbamazepine to treat manic or mixed phases of the disorder.

While medications form the basis of bipolar treatment, ongoing psychotherapy will help the patient understand their illness, accept the disruptions it has caused in their lives, and learn to cope with future issues as they present themselves. In particular, cognitive-behavioural therapy, interpersonal/social rhythm therapy, and family or group therapies are effective in speeding recovery and improving functioning. Electroconvulsive therapy is another option for those who are unable to take or don’t respond well to medical treatments; other new types of non-chemical treatment are vagal nerve stimulation, transcranial magnetic stimulation, or light therapy for those whose symptoms increase during the winter months.

It’s important to remember that during a manic phase, the patient may take more risks and refuse treatment; family members may need to intervene and ask for medical help.

Residential Inpatient programs like the one here at Valiant Behavioral Health are the perfect place to obtain a referral for an accurate diagnosis, and then to work on treating the Bipolar disorder itself.

Learn how to pay for residential mental health treatment

Learn how our mental health program has helped others, Read Reviews